A)  A mix of 1,2,3- We need to have a budget freeze on all departments while we conduct an Audit.  The audit should be from the many accounting companies we hire.  Offering their services for free.

A) Another attempt of pension reform should be done with the cooperation of the Unions.  I'm open to any attempt that could be made with Unions being brought to the tables.

A) We can't just keep throwing money at our school systems without re-evaluating the structure of CPS and how that money gets distributed & managing those expectations.  Principles need to be able to allocate their own budget.  We need decentralize CPS.

A)   We need to honor the pension system that we set but moving forward we need to stay with the 403b plan for all teachers.

I support school districts outside of Chicago picking up their own pension costs.

A) We need to increase our funding but at the same time boost the outreach of public higher education. Encouraging our graduating High Schoolers to attend our in State Schools.  We need to ensure we are updating our courses to meet the needs and wants of students, i.e. more nursing programs for the growing market, Engineering, etc.  We need to secure top Professors in those fields that will help engage and gain more students.

A) I don't believe in higher gas tax, the gas tax is already way to high.  If Chicago decides to allow Gaming in the city we need to ear mark an "x" amount of that tax to go to our infrastructure.

Yes, a balanced approach is necessary.

A) creating tax breaks for new businesses coming to Chicago

B) Vocational job training, increasing our pool of skilled labor

C) Active recruiters going to States to collect and recruit companies to come back to IL.  Assess their needs and how we can lure them back or to IL.

A) I support Illinois Clean Jobs Bill & believe over time we will be able to reduce our carbon foot print and attract more business by demonstrating our ability to be a leader with the global invective for clean energy.

A) I support a Cap-and-trade program.  If companies can easily and cheaply hit their numbers then should be able to benefit from that.  Creating a carbon tax is deterring more businesses to not entering the State.

A) Support across the board.  Our prison population for non-violent prisoners are costing the State substantial amount of money.

A) Not for all crimes, violent repeat criminals, sexual predators, etc.

A) For Juveniles it would have to be a case by case.  I believe in rehabilitation therapy but still keeping them on the registry for adults.

A) Yes, would be opening to reviewing the pros-cons.

A)  We need to eliminate the "frivolous" lawsuits", which tie down our court systems & companies resources.

A)Support, we need to get more people engaged in politics.  It's the voters choice to show up to the polls.  There’s a large gap up younger voters who aren’t aware of where & even how to register.

A) We need to put caps on the amount of money that candidate can receive in a local election.  Money in politics now controls every facet of Government.  It has gotten out of control.

A) Mrs.Doyle, I'll be the first one to admit that I wasn’t the easiest or best behaved student.  But she was the one that believed in me, she would fight for me and pushed me to stop being a punk and to focus on classes.  I hope she reads this. 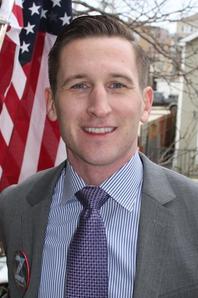