I oppose all tax hikes.  I do not hold that Illinois has a revenue problem. Rather, Illinois has a spending/debt problem due to years of legislators ignoring Illinois’ Constitutional requirement for a balanced budget.

Furthermore, Illinois’ pension problem must be fixed to free up additional funds, up to and including amending Art. XIII, Section 5 of the Illinois Constitution.  Some of the provisions of the Pension Reform Package contained in Gov. Rauner’s Turnaround Agenda are good and reasonable starting points.

Yes, absolutely. Illinois needs pension reform. Government has grown too big, and continues to do so. Thus, as stated in the answer to the question above, a pension reform must include an amendment to the Constitution in order for that reform to be permanent and sustainable.

Yes, absolutely. Nothing in the Constitution calls for the consent of legislative leaders for the General Assembly to pass a budget.  Besides, legislative leaders, namely, currently, Mr. Madigan and Mr. Cullerton are both elected members of the legislature. They should get no special treatment.

“The State has the primary responsibility for financing the system of public education.” Illinois Constitution Art. X, Section 1.

As cited above, education (to K12) is the special province and responsibility of the State.  Therefore, Chicago (or any other School District) should not, and should not have been, treated any differently from any other within the State.  Any policy, including pension and any pension contribution formula, must be uniform and applied uniformly across the State.

In addition to free education “through secondary level,” the Illinois Constitution allows for “such other free education as the General Assembly provides by law.” Art. X, Section 1.  Thus, in a solvent, fiscally responsible, and prosperous Illinois, I would support that public higher education be free too – at least through community college level.  However, the current state of our State cannot even begin to entertain or sustain that.

It is unfortunate that the Monetary Award Program and the hardworking Illinois students who rely on it are now being held hostage to the failure of Illinois Legislators to pass a budget.  That needs to be addressed and fixed without further delay.

Again, I do not hold that Illinois has a revenue problem. Rather, Illinois has a spending/debt problem, including “fund sweeps,” and “diversions” of our tax dollars. These are the problems that need to be addressed.  There are revenues already dedicated to Illinois’ infrastructure needs.  We must use appropriated funds for their purposes.

As is, this seems reasonable to me. So, yes, Illinois should create a reliable funding stream for capital cost.  However, such funding stream must remain dedicated to its purposes and must not be “swept” or “diverted.”

In no particular order:

Support – contingent upon hearing/learning more about this issue.

Support/Support – contingent upon hearing/learning more about this issue.

I support creation of a cap-and-trade program. No carbon tax.  The revenue from such “carbon tax”, as usual, may be subject to “fund sweeps” and “diversions.”

The first part of this question is both vague and broad.  However, I do support limiting straw gun purchases.

I support the current federal licensing (FFL) for all firearms dealers.

This appears, on its face, to be a common-sense approach to reducing gun violence.  However, my support for this will turn on a clear legal definition and clarification of what constitutes a “crisis.”

However, our current expungement/sealing laws need reviewing, especially the new “all or nothing” requirement for expungements.

I will be in favor of a proposal to end the placement of juveniles on the state’s sex offender registry.

For adult sex offenders, I will be in favor of “delivery of rehabilitation therapy,” but not on tax payers’ dime.

I support the current appointment/retention system for judges.

There are several proposals in the Workers Compensation reform section within the Economic Competitiveness and Job Growth Package contained in Gov. Rauner’s Turnaround Agenda that I find as good-faith, non-partisan/bi-partisan conversation starters towards a true and sustainable solution to Illinois’ problems.

I support automatic voter registration only if it accounts for the citizenship status of voters before they are registered.  As an attorney who practices Immigration Law, I know that automatic voter registration may pose as a potential trap for innocent and hardworking documented non-citizens to break the law, thereby foreclosing any chances or possibility of them becoming U.S. Citizens.  Federal law forbids non-citizens – including legal, documented, permanent residents – from registering and voting in elections.  A permanent resident who is automatically registered to vote will inadvertently break that law.

A)My father was the most important teacher in my life.  My strong commitment to education is the path that has led me to where I am today in life.  That path was laid and strongly instilled in me early in life by my father, who himself was an educator.  He taught me both life and academic lessons. Although he died when I was 17, I never departed from that path. 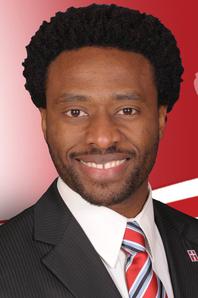