Danny K. Davis is endorsed by the Sun-Times. Read the endorsement.

Political/civic background: Danny K. Davis was chosen by the people of the 7th Congressional District of Illinois as their Representative in Congress on November 5, 1996. He has been re-elected by large majorities to succeeding Congresses.

Congressman Davis has distinguished himself as an articulate voice for his constituents and as an effective legislator able to move major bills to passage. He has developed a unique and energetic style of communication and interaction with his constituents setting up dozens of advisory task forces to consider significant questions of public policy. He hosts several weekly television and radio shows which feature audience call in and
produces regular written reports to every household in the district. In addition, he maintains weekly office hours in the district and is widely sought after as a speaker at district events.

In the 114th Congress Representative Davis has indicated a focus on issues of job creation, poverty, health care, education, youth and criminal justice reform.  Prior to his election to the Congress he served on the Cook County Board of Commissioners having been elected in November 1990 and reelected in November 1994. Previously, he served for eleven years as a member of the Chicago City Council as Alderman of the 29th Ward.

Before seeking public office Congressman Davis had productive careers as an educator, community organizer, health planner/administrator and civil rights advocate. He has received hundreds of awards and citations for outstanding work in the areas of health, education, human relations, politics and advocacy including six honorary Doctorate
Degrees from well known Colleges and Universities. He has traveled extensively throughout the United States and has spent time in Africa, Europe, the Middle East, Asia and in South and Central America. Born in Parkdale, Arkansas, on September 6, 1941, Congressman Davis moved to the Westside of Chicago in 1961, after having earned a Bachelor of Arts degree from
Arkansas A.M. & N. College. He subsequently earned both Masters and Doctorate degrees respectively from Chicago State University and the Union Institute in Cincinnati, He is married to Vera G. Davis, has two sons, Jonathan and Stacey, and is a member and Deacon of the New Galilee M.B. Church. 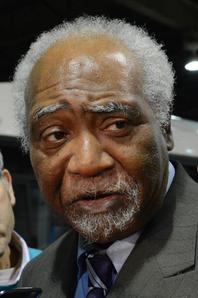 A) I am energized by the regularly renewed mandate given by the people of the 7th Congressional District for the vision I have offered for the future of the District and the nation; enthused by the response to my outreach to involve residents in participating in the setting of an issues/legislative agenda and humbled and appreciative of the people’s response to the record of my tenure in the Congress

A) Yes, my office will be happy to respond to all such requests.

A) Campaign: sons Jonathan and Stacey, my wife, Vera G. Davis serves as my campaign treasurer without compensation. Public: none.

A) Commitment to a consistent, long term strategy based on the broadest possible global alliance, including states which may not be allies but which may have significant interests in combating ISIS, aimed at finding a political solution to building sustainable, representative governments in the region and rejection of short term, “quick fixes” imposed by unilateral or narrowly based military actions. Our recent diplomatic breakthroughs with Russia regarding Syria are an example of what I believe should be our direction.

A) I voted NO. I believe the security protocols the Administration has in place are sufficient to protect our nation and that the potential for harm to Americans is far greater from the international projection of religious and/or national discrimination represented by the bill and its corrosive effects on our most basic constitutional freedoms. Our nation has rightly enjoyed a special place in the eyes of the world as a moral standard and welcoming home for the oppressed and dispossessed which we should not abandon.

A) I do not support the notion of the United States as the world’s “policeman.” Military actions should flow from and be guided by a diplomatic consensus on the road to a political solution.

A) Panel should be given a short deadline as this has turned into a political witch hunt rather than a legitimate Congressional investigation.

A) Experts in cybernetics agree that there is no way to create a “back door” to encryption which cannot be broken by criminal or state sponsored hackers. Encryption is a critical tool in modern computing and weakening encryption standards would expose vast arrays of infrastructure, finance, and national security to attack, not to mention our generally recognized constitutional guarantees of privacy.

A) I support transferring remaining detainees and closing Guantanamo. We have the facilities to securely and less expensively house detainees while we bring all appropriate legal action.

A) Keep guns out of the wrong hands: universal background checks, gun locks to prevent children from access, getting tough on illegal gun sales and transfers

A) I support this legislation even though it raises complex legal questions about the determination of “intent” which might be applied to actions other than regulation of weapons.

A) I believe, and more importantly, science supports climate change initiated by human action. I welcome the Paris agreement but believe it will require sustained effort to make its goals a reality.

A) I support a progressive tax code based upon ability to pay and closing loopholes which enable corporations and wealthy individuals the escape their fair share of taxes.

A) Yes. Our experience with the Great Recession clearly demonstrates the need for such an approach.

A) I strongly support Obamacare and would move to extend and expand it to a Medicare for all model. I am a co-sponsor of HR 676 and have been a co-sponsor of such legislation for my entire tenure in the House.

A) Yes to both questions.

A) I have sponsored and co-sponsored several pieces of legislation on student loans over the years and would support making public colleges tuition free for all.