I believe that there are other ways we can fund the pension system without reducing benefits. There are several ways we can generate new revenue streams. First, I believe that we can create a LaSalle Street tax. Billions can be generated and used to fund the pension and our school system. Another revenue stream would be to enact a commuter tax on those who travel to the city to work and to leave at the end of day. Finally, we should consider taxing more services in the city of Chicago. Some studies show that hundred millions of dollars can be generated if the tax base was expanded to certain services.

A: By no means can I support a property tax hike. I would represent one of the poorest wards in the city that struggle every day to make survive. Raising property taxes will be an added burden on them and may even cause them to move out of the city because they cannot afford the property taxes or the raises in rent due to property taxes.

A: I believe that there are other ways we can fund the pension system without raising property taxes. There are several ways we can generate new revenue streams. First, I believe that we can create a LaSalle Street tax. Billions can be generated and used to fund the pension and our school system. Another revenue stream would be to enact a commuter tax on those who travel to the city to work and to leave at the end of day. Finally, we should consider taxing more services in the city of Chicago. Some studies show that hundred millions of dollars can be generated if the tax base was expanded to certain services.

As a police officer, I see the growing need for my city to have more patrols and more officers on the streets to help reduce crime. I see it every day and safety is a necessity for the success of our city.

I wholeheartedly support an elected school.  Many of the schools on the Westside would have not faced closure if we had some one from our community representing us. The criteria for a Chief Executive Officer should include a background in education, years of experience, and should be hired by the elected school board and not the mayor.

1)    I would use TIF dollars to help promote community owned businesses in my ward instead of big corporate entities.  I would use TIF dollars to help create more community owned businesses.
2)    I want an ordinance created for my ward that states that any construction project that happens in my ward has to have half of their workers hired from my ward.
3)    I support a 15 dollar minimum wage that will put more money into people pockets and generate revenue for businesses and the city which will then create more jobs.
4)    I want to create a youth summer jobs programs in my ward that will give the youth opportunities to earn money and to keep them off the streets.

A: Have no comment on this issue at this time until I have more information.

Yes and No. I understand the need for a casino that could generate billions in revenue for the city. However, I worry about the effect it would have on lower income communities such as mine where people would go to the casino and gamble their earnings a way because they need more money.

Please explain:
I believe that we need to get rid of all the speed cameras and red light cameras in the city.

A:   1)    I will focus on using the TIF dollars in my ward to revitalize the infrastructure of ward. Just recently the 24th Ward saw 24 million dollars strip away in a finance committee meeting because the incumbent was not present. The money, which included TIF funds and proposed projects, was given to other Chicago departments. Under my tutelage this will not happen again.
2)    I will work with the state legislature to encourage the formation of an elected school board. There were many schools that were shut down on the Westside including the 24th Ward and this would have never happened if we had an elected representative.
3)    Just recently, it was made public that Wall Street and their banks were involved in fraudulent swaps that have cost the city millions. This is unacceptable. This is money that could have been used to help fix our streets, better fund our schools, and give city workers that back pay that they deserve. I will move to have the millions that were lost, given back to the city.
4)    I am an advocate for the Obama presidential library to be located in the Lawndale neighborhood. I hope to use my influence to have the library in Lawndale which would spur economic growth and development.
5)    Shutting down the red light camera program in the city 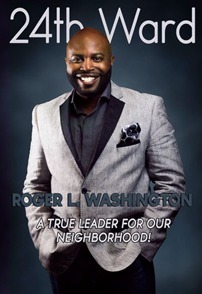