Chicago's fire and police pensions are greatly underfunded, and the city is required by the state to make a $550 million payment into the pension funds by the end of 2015. Do you support restructuring the pension systems, inevitably reducing benefits, to put the funds on sound financial footing?
Yes or No:  No, I don’t.
Please Explain:  I don’t believe that going back on our commitments to public workers should be our first choice, particularly when we show no willingness to look at other income sources.  It is unfair to be so willing to renegotiate these workers’ wages (“heroes”, as some call them), but unwilling to challenge deals struck with banks costing the city millions, such as the toxic interest rate swaps with entities such as Bank of America and Loop Capital.  By renegotiating these swaps, the city could add millions to its coffers.  Similarly, there are $1.5 billion unspent TIF dollars.  When one party is doing all the giving away it is impossible to come up with a fair deal.   If the conditions under which certain agreements with public workers were made have changed, then we need to see what happened and make the appropriate long term adjustments.
Chicago's pension systems for municipal workers and laborers already have been restructured, reducing benefits, but the city has yet to identify where it will find the revenue to sufficiently fund those systems. Under what circumstances would you support a property tax increase to raise the needed revenue for the fire and police pensions and/or the municipal workers and laborers pensions?
We need to give workers what they are due.  That is the bottom line.  Going back on our word to the people who worked for us will undermine our system and compromise our governability. \
2) Chicago Public Schools pensions
Large and growing payments required to keep the Chicago Teachers’ Pension Fund solvent are squeezing CPS' budget, forcing cuts elsewhere and limiting investment. The Chicago Board of Education has increased property taxes, but it is not enough to keep up with the high annual costs. What measures do you support to ensure a solvent retirement system and to improve the district's finances?
We need to take a new look at our priorities and re commit ourselves to providing quality education to all children.  That means providing a modern, competitive arrangement to those who teach.  In other words, we need to put our money where our mouth is when it comes to education.  Chicago does not need a TIF for La Salle St., for instance, which stops top tax payers dollars from going to schools, parks and other taxing bodies.  Annually, public schools lose $17 million to toxic swaps.  We need to take a hard look at what needs public support, and free private entrepreneurs to do whatever they want with their own money.
3) Revenue

In light of the financial issues discussed above, do you support any or all of the following measures, each of which would require, at a minimum, approval by the Illinois Legislature?
* A statewide expansion of the sales tax base to include more consumer services
Yes or No:  Yes
* A tax on non-Chicago residents who work in the city

Yes or No:  Yes
* A tax on electronic financial transactions on Chicago’s trading exchanges, known as the “LaSalle Street tax”
Yes or No:  Yes
Please explain your views, if you wish, on any of these three revenue-generating measures.
The city funds much of its expenses with regressive taxes, fees and fines distributed evenly regardless of a person’s wealth or income.  Some of the taxes you mentioned above could help bring more resources from those who can most afford it.

Do you support hiring more police officers to combat crime and gun violence in Chicago?
Yes or No:  Yes
Please explain:
I support hiring more police, but I would put more of those resources in community policing and other trust building activities.  Our ward is very diverse, and different communities experience, respond to and perceive crime in different ways.  Some of the communities that make up the 25th ward have low confidence in the police.  Recent national events also contribute to this feeling; building relationships remains as important as always.  However, as an educator and as an economist, I also know that police cannot solve all crime with their work alone.  Crime, as we know, has social roots, and is heavily concentrated in certain areas of the city where poverty and segregation overlap.  Therefore, inclusion and the creation of opportunities need to go hand in hand with any policing strategy.
What legislation in Springfield would you support to try to stem the flow of illegal guns into Chicago?
At this point there is no legislation pending in Springfield.  I would repeal conceal and carry measures, demand strict background checks, and impose heavier consequences on the trafficking of weapons making it into Chicago from other states.
5) Elected school board
An advisory referendum on switching Chicago to an elected school board, rather than an appointed board, is expected to be on the ballot in more than 30 wards on Feb. 24. Currently, the mayor appoints all seven board members and the Schools CEO. Do you support a change to an elected school board?
Yes or No:  Yes
Please explain: I am a firm supporter of an elected school board, because it is right and because the appointed one we have does not work.  I actively organized to have the referendum in the 25th ward.  The appointed school board has shown no independence, neither from Mayor Emanuel nor from its own members’ financial interests.  Even with different members, an appointed board would not meet the independence and accountability mark.  In the last few years, members of the board of education have opted to defund schools and privatize public education because, aside from expressing their frustration, people had no way of changing the board’s decisions.
Conflicts of interest are hard to avoid in the current model.  Conflicts of interest among the members of the current board have been amply reported.  Virtually all board members have had some personal economic interest involved in a decision. Deb Quazzo is only the latest example.  Finally, it is only appropriate that the people with most at stake in the success of public education have a chance to directly weigh in the process.
6) Tax-increment financing districts
TIFs are the primary economic development tool of the city. In a TIF district, taxes from the growth in property values are set aside for 23 years to be used for public projects and private development. Do you support increasing the annual TIF surplus that the mayor and the City Council have declared in each of the last few years, money that goes to the schools and other city agencies?
Yes or No:  Yes
What reforms would you propose for the city's TIF program?
We need to take a deep look at the whole program and determine whether TIF is still developing blighted areas, or whether it has become a hindrance to development.  For instance, having $1.5 billion unspent waiting for a few people to decide where they go while closing schools and shutting services does not sound like development.  In Pilsen, the TIF has created blight.  Transparency is definitely needed at all TIF levels. We need to know how much money we have in the fund, if it is committed, to what is the money committed and under what terms.  Payers into the TIF need to know where their dollars are going or what projects is their TIF funding.  For instance, in low income communities residents may not be too thrilled to be subsidizing DIVVY bikes and other for profit projects while schools fall apart.  It is also important to know what TIF recipients are also political donors, and there should be rules about this interaction.  There should also be more community participation the distribution of TIFs, similar to a community budgeting process.
7) Neighborhood economic development
What would you do as alderman to boost economic development in your ward, and bring jobs to your community?
I would level the playing field so that everyone with an idea and a plan can have a chance to execute it, not only family and well connected donors.  Not all investors feel comfortable with the fear and pay-to-play ways of the city of Chicago, the political culture that reigns in the 25th Ward.  Running a transparent ward operation will motivate more businesses to come here.  Aside from that, there are many opportunities in the ward.  Along with my organization and others, I have been active in the redevelopment of the Fisk and Crawford coal plants in Pilsen and Little Village.  We have drafted a set of principles that promote leaving the area zoned for industry to attract new jobs for the community, a process that may deliver good news soon.  Regardless of those jobs, the redevelopment of Fisk will itself bring, at a minimum, green areas and access to the river.  These assets will attract more visitors to the community and open new tourism opportunities, including the creation of a new gate to Pilsen through the river.  In addition, all the communities in the ward have their own opportunities.  Whatever development we are able to bring to the community, we need to make sure that we can balance it with opportunities for all and avoid further displacement.
8) Size of the Chicago City Council
The City Council has 50 members, but civic groups and other regularly argue for reducing the size of the Council. What should the size of the Council be? Please provide a specific number. And why?

It is a matter that requires thought.  Given Chicago’s racially divided nature, its historic failure to represent the interests of minorities and the huge influence of money in politics, a new formula would require safe guards to ensure that communities of color feel enfranchised.   If we had only 25 wards, for instance, we need to make sure all communities are adequately represented.  Reducing the number of seats in City Council, therefore, may require additional reform, such as eliminating private money from politics.
9) A Chicago casino
Do you support, in general concept, establishing a gambling casino in Chicago?
Yes or No:  No
Please explain:  I don’t think this is an industry that we need in Chicago.  Casinos are often accompanied by a number social dysfunctions.
10) Red light and speed cameras

Does the city have an acceptable number of red light and speed cameras currently, and are they properly employed?
Yes or No:  No
Please explain: The red camera program has been a scam from the beginning.  First there were issues in the selection of the contract.  Then the City messed with the lights’ timing.  Finally, the City gave tickets to thousands who did not deserve them.  The latest news of the program was that the cameras don’t really help increase safety.  Rather, the red light cameras serve as a regressive tax so that the poorer residents play the same role in paying for the city than a very rich one does.  These cameras need to be put away along with those who brought them, Mayor Emanuel and Ald. Solis.
11) Ward issues
What are the top three issues in your ward — the ones you talk about most on the campaign trail?
Lack of affordable housing and displacement
Democratically Elected School Board, fully funded neighborhood schools
More jobs and living wages 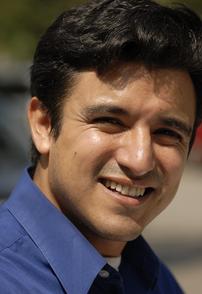