Please Explain: The police and fire systems are less than 30 percent funded. When you allow something to get as bad as Chicago's pension system has, there rarely are any good options for repairing it. We don’t want to be the next Detroit.

A: Under state law, Chicago will be required to more than double that $476 million pension contribution by 2016, and the annual tab is scheduled to continue rising rapidly after that. The city says it can't afford the higher contribution, but even the new payment is barely half of the $2.2 billion payment Chicago should make according to GASB rules. (Government Accounting Standards Board)

* A tax on non-Chicago residents who work in the city
Yes or No:YES

A tax on non-Chicago residents may be a tough sell but in the end, the city needs the revenue to survive.

The presence of more professional non biased police is always a great idea to thwart crime and gun violence. I am also a supporter of more community based coalitions to remedy crime toward protection for the community residents when police are not around.

A: I will support legislation that promotes stricter rules on gun sales. Chicago has no gun stores or ranges but still has one of the highest gun violence ratings in the nation.

I am 100% for an ELECTED SCHOOL BOARD
Ald. Michelle Harris, 8th, who as chairman of the Rules Committee decides which ballot questions get voted on. She has blocked issue over and over again because she votes 100% with the Mayor, who is not in favor of an Elected School Board.

A: Mayor Emanuel cuts benefits to retirees, jacks up your property taxes, and brings in more cash for things like the River Point office building in the West Loop, the Hyatt hotel in Hyde Park, the aforementioned South Loop basketball arena for DePaul, and that South Loop hotel for Marriott. Loopholes in TIF laws need to be remedied and transparency with accountability is a must.

A: I am a firm believer in revitalizing and opening new Trade Schools and creating a local business directory of professional qualified businesses that exist within our community. The 8th Ward has become an economic dessert with no help (on a whole) from the Alderman. Certain areas of the Ward are beautiful business areas while the vast majority looks poverty stricken.
I also am heavily involved in summer job programs for our youth.

A: Chicago is big. Keep the 50 but the remapping every ten years need to be overhauled.

Please explain: I’m against Casino’s and what they stand for. Revenue at the cost of creating addicts? I’m not for it.

Please explain:
There are several Red Light cameras in my Ward, which the Alderman voted YES on. They flash all night and day but I don’t see them downtown

1) Unemployment with no programs for funding and job creation.
2) Crime is rampant especially murder and gun violence.
3) False leadership. The Alderman votes 100% WITH the Mayor on ALL council floor issues. Who does she represent? The residents of the 8th Ward or Rahm Emanuel?

I started the SAVING THE YOUTH MOVEMENT in 2003 to bring attention to the highest murder rate in the nation that Chicago had that year. I then followed with a STOP THE KILLING initiative in 2005 which brought together over 300 parents and youth to march and rally against gun violence in the 6th, 7th and 8th Wards, all based out of my barbershop at the time where I held gang intervention meetings weekly. I went on to create a community watchdog alert team in 2006 that led to the arrest of Larry Barlow, the murderer of Antoinette Means who was the manager at a KFC located at 83rd and Jeffery. Later that year I obtained 1000 signatures from residents to plead with CTA to bring bus service back to 83rd St. Along with about 50 supporters we marched in the winter cold with megaphone in hand.
As the community started to see me appear on news channels I was asked to run for 8th ward Alderman in 2007. I placed 3rd out of 10. By 2011 I had worked with CPS in the Culture of Calm program and increased my visibility in high crime areas to show that it wasn't just about being the Alderman and collecting a check. I was inspired to run in 2011 and placed 2nd. Shortly after I started the B.M.U. organization [Black Men United] which fights on all community levels to secure our neighborhoods by direct intervention with gangs, citing and protesting unfit stores in our communities which sell outdated products, drugs and cigarettes even to minors. 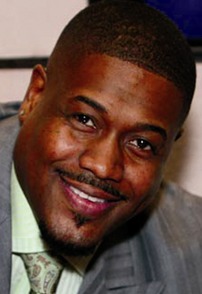