Please Explain: Chicago must meet its pension obligations while being prudent with public money. Solving this problem will hinge upon carefully examining all sources of municipal revenue and looking for cost savings. The path forward may require some reductions in benefits for future retirees. I have mentioned using the Fair Tax bill to help solve our financial issues. This is one of the main reasons I support the Fair Tax bill, because making our police and firefighters pay the price for years of bad management of our city finances is morally wrong. I do believe we need to be having this discussion now rather than later. Chicago's pension systems for municipal workers and laborers already have been restructured, reducing benefits, but the city has yet to identify where it will find the revenue to sufficiently fund those systems. Under what circumstances would you support a property tax increase to raise the needed revenue for the fire and police pensions and/or the municipal workers and laborers pensions? Homeowner have already been taxed to the breaking point. As I mentioned previously the Fair Tax bill would be a step in the right direction in making our cities budget solvent again.

A: Again I believe we must pass the fair tax bill as an alternative to higher property taxes, I would be willing to look at alternatives to insure that we meet our obligations to our teachers. If elected, I will work closely with the state assembly to pass the Fair Tax bill.

I would like to hear and participate in more conversations about this issue.

This is not only a local issue, we have to advocate for additional federal funds to hire more police and improve training. What legislation in Springfield would you support to try to stem the flow of illegal guns into Chicago? There are already many legislative bills in Springfield and the issue is not being resolved. This issue must be addressed on a national level to address for example, the flow of guns coming in from Indiana and surrounding states. If we can't address this at the same time, than these bills will have a minimum effect on the flow of guns into our state.

Please explain: Yes. An elected school board ensures a powerful voice for parents and strong advocates for children.

Q: What reforms would you propose for the city's TIF program? This is a system that needs to be examined carefully and with greater emphasis on transparency. Until this happens, there should me a moratorium on creating any new TIFs.

A: Streamline and improve the permitting process that will enable vacant homes to be renovated faster and new businesses to be created. Equally as important is bringing in new City Council leadership that does not hamper job creation as is currently the case. I pledge to stamp out the corruption across the 31st Ward that stifles new business development.

A: While it seems like a popular idea to downsize government, what we would be creating would be a higher budget for a few politicians to continue to represent their districts. Doing so will only allow Ray Suarez to ignore more constituents while allowing Suarez to victimize more smaller businesses with his "corruption tax." We should be cutting the salaries of our Alderman. Why is an alderman making more money than a State Senator? One only has to drive through the 31st ward to see how Ray Suarez will only work to enrich himself. With only 20,000 registered voters Suarez has 3.6 million dollars in his campaign fund, to increase his combine his ward with other ward will only increase his campaign fund. It is elected officials that makes people feel like the government isn't working. This will be a short answer to removing ineffective politicians, but it also makes it harder for all minority groups are properly represented on the council.

A: Do you support, in general concept, establishing a gambling casino in Chicago? Yes or No: Yes

Please explain: Although I have a moral issue with gambling, I do understand that this is a job and revenue creating source that needs to be explored. While other communities around the city are benefiting from these casinos, we should combine our convention industry and a possible casino together.

A: Having walked in every neighborhood in the 31st ward, and knocked on hundreds of doors, the one single issues I have heard that resonates through the ward is public safety and fairness receiving service from the alderman's office. Residents feel that the alderman is not full time and is not engaged in creating partnerships that would reduce crime. Many residents have teenagers and they are beginning to question if their neighborhood is the right environment to raise them. Residents and small business are definitely not happy with the services they receive. Transparency is also a major. Ray Suarez has been alderman since 1991. His closest ally, Joe Berrios, has made the 31st Ward organization ground zero for his political machine operation. That organization witnessed its biggest defeat this year when Will Guzzardi soundly defeated Berrios’ daughter, Toni Berrios, for Illinois State Representative. The district includes most of the 31st Ward. This clearly shows that residents are ready for a change. Also, we have documented small businesses that say they are required to buy a table at a Suarez fundraiser in order to get things done. Many feel that you have to reciprocate something in order to get help. This is unacceptable 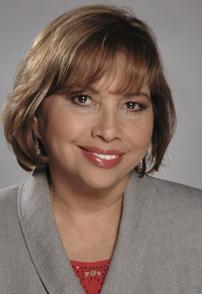 Milagros "Milly" Santiago is endorsed by the Sun-Times Editorial Board. Read the endorsement here.