Yes or No:    No, not until all other possibilities have been exhausted.

Please Explain:
It is very important to remember, and deserves to be reiterated, that the employees did nothing wrong to cause the pensions to be grossly underfunded.  There have been some who have claimed that the steep pension payment ramp was created artificially and that it should be reamortized to better manage the payments.  Also, TIF anticipation bonds, as suggested by Ald. Reilly, can be another method to fund or close the gap.  Although Ald. Burns (formerly a state rep.) has stated that it would never pass the state legislature, a “LaSalle St.” transaction tax deserves some serious discussion; and codifying the elimination of “Pension Holidays”.   Reducing employee benefits should be reserved as the very last option for the sole reason stated at the beginning of this paragraph.

Q: Chicago's pension systems for municipal workers and laborers already have been restructured, reducing benefits, but the city has yet to identify where it will find the revenue to sufficiently fund those systems. Under what circumstances would you support a property tax increase to raise the needed revenue for the fire and police pensions and/or the municipal workers and laborers pensions?
See answer above.

The state’s pension legislation fix having been struck down by a Sangamon County judge and now in the hands of the State Supreme Court, have effectively put on hold any possible proposed CPS measures that will fully fund the pensions.

Yes or No:    Leaning toward Yes

Yes or No:    Leaning toward Yes

Please explain:
I do support hiring more police officers to combat crime and gun violence; however, this is not the only means to combat crime.  A multi-pronged approach is necessary.  An approach that involves after-school programs, summer jobs for teens, and jobs for adults.  A balanced approach of hiring more police officers with investing in these programs is what is needed.

Q: What legislation in Springfield would you support to try to stem the flow of illegal guns into Chicago?
§    Registering all firearms when bought and/or sold either at a gun shop or in private.
§    Requiring the registered owner to file a police report when a firearm is lost or stolen.
§    A waiting period, which includes a complete background check of any individual purchasing a firearm.

Please explain:
I have wrestled with the issue of an elected school board.  What is of concern is the gridlock that can occur when each elected board member sticks to their principals that got them elected, and refuses to compromise.

Q: TIFs are the primary economic development tool of the city. In a TIF district, taxes from the growth in property values are set aside for 23 years to be used for public projects and private development. Do you support increasing the annual TIF surplus that the mayor and the City Council have declared in each of the last few years, money that goes to the schools and other city agencies?
Yes or No:    YES

What reforms would you propose for the city's TIF program?
Due to the city’s slow economic recovery and increasing expenditures, declaring slightly more end-of-year TIF surplus can be helpful.
Studying past and current TIF districts performance and creating a set of criteria wherein a TIF district may be dissolved before the 23rd year for lack of achieving a set of performance measurements.

I would use TIF funds for its original intended purpose - to invest in the local business and city infrastructure.  This local investment would make the commercial strips more of a destination so that “outside” money can come and be spent in the 15th ward.  I would also encourage the local businesses to hire local residents, thereby keeping more money in the ward and improving the lives of the local residents.

Please explain:
A Chicago casino can help develop a new revenue stream that can help a cash-strapped city.  It could bring in new revenue from tourists and those with disposable income.

Please explain:
I am aware of 2 speed camera’s that are not properly employed.  They are neither by a school or a park and should be removed.
The red light cameras have recently come under fire for a shorter yellow light, which issued thousands of dollars in tickets.  This needs to be corrected in order to ensure its legitimacy.

The top three issues in the ward are lack of city services, public safety, and jobs/economic development. 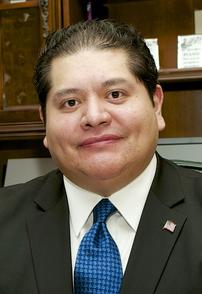