Please Explain:  The City must work with the legislature in order to remedy this problem but I firmly believe that we must keep our promise to city workers.

A: We should seek out alternative revenue sources like the tax on LaSalle Street, commonly referred to as the transaction tax.

A: A Chicago based casino with it’s revenues dedicated towards pension reform would be a good start.

For the last several years, the City has spent well over 90 million dollars on overtime.  We need to prioritize our resources and hire an additional 500 officers, beyond just keeping up with attrition.

Q: TIFs are the primary economic development tool of the city. In a TIF district, taxes from the growth in property values are set aside for 23 years to be used for public projects and private development. Do you support increasing the annual TIF surplus that the mayor and the City Council have declared in each of the last few years, money that goes to the schools and other city agencies?
Yes or No:  Yes

A: Continue to work with the Little Village Chamber of commerce and other organizations that promote local economic development as well as small business development so that our neighbors can have local jobs.

A: Should remain the same.

Please explain:  I and other alderman have called for an investigation to figure out if the safety claims are actually being met.

"Only 27 years-old when he joined the City Council as its youngest member, Rick Muñoz has become a dominant voice for reform in Chicago politics. His battles against City Hall corruption have lead the Chicago Tribune and the New York Times to call him a political force and an independent voice on the City Council. NBC has called him the only real independent alderman, and the Huffington Post describes him as 'widely popular, especially among progressives and independents.' Voters in his district re-elected him last time with 64 percent of the vote.

"Rick Muñoz earned his leadership role in the reform movement through innovation and determination. As a freshman member of the Council, city bureaucrats rejected his request for more school spending in his youthful community. So, Rick put forward an innovative proposal to generate hundreds of millions of dollars in new education spending without raising taxes. The heart of his plan was a move to link the bonding capacity of city agencies with poor bond ratings to those agencies with higher ratings and allow for the issuing of new bonds at favorable rates for the city. The initiative was one of the first undertaken by the newly reconstructed Board of Education in 1995.

" 'Give credit to Ald. Ricardo Muñoz for constantly pushing new ideas,' said the Tribune after his school funding proposal was adopted. 'He works hard, his enthusiasm is contagious and his efforts are paying off.' (Source: Chicago Tribune, 1999.) Rick has continued to be a citywide leader on education, overseeing the construction of more new schools in his neighborhood than any other throughout the state.

"True to his reputation for innovation, Rick worked to make one of the new schools in his community into the first-ever "world language" academy in Chicago. The world-language curriculum requires that all students become proficient in at least two languages, taking some of their classes in each language. His commitment to education has made Rick a crucial leader as the city moves from “hog butcher to the world”, to a knowledge-based economy built on innovative companies like Group-On.

"Beyond Chicago, Rick is known as a progressive leader within the national Democratic Party. Serving as 4th Congressional District Democratic Committeeman, Rick traveled across the country – at his own expense – to help President Obama during the historic 2008 election. The national party also asked Rick to deliver an historic radio address on the GLBT rights and the Hispanic community.

"Rick was one of the original City Council sponsors of the historic Chicago Living Wage legislation that requires city contractors pay employees a salary that is high enough to support a family. He helped lead a citywide, multi-racial coalition of labor, community, and religious organizations to victory when on July 29, 1998 the Chicago City Council finally passed the Living Wage Ordinance. On November 6, 2002 the City Council increased the living wage by 16% and in a historic amendment, indexed the living wage so it will get adjusted every year according to federal income guidelines.

"Rick is also responsible for passing major ethics legislation through the City Council. He sponsored and passed an ordinance making it illegal for high-ranking administration officials to receive favorable city contracts, while still on the city payroll.

"In his neighborhood, Rick is known as a committed public servant, who twice declined his City Council pay increases and instead gave more than $90,000 to charitable organizations throughout the community. Rick is equally generous with his time, organizing block clubs and weekly clean-ups of streets, alleys and vacant lots. He also teaches classes on leadership at local schools, including serving as an Adjunct Professor at the University of Illinois at Chicago.

"Ricardo Muñoz was born in Monterrey, Mexico, and is currently the ranking Mexican-American member of the City Council. A graduate of Northern Illinois University, he recently celebrated his 25th  wedding anniversary with wife, Betty Torres Muñoz. They are the proud parents of Ricardo Alejandro and Angelica Maria Muñoz." 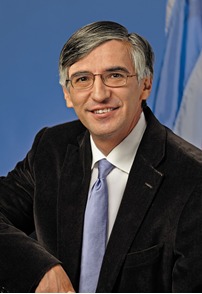 Ricardo Muñoz is endorsed by the Sun-Times Editorial Board. Read the endorsement here.