Management of pension funds should respect what workers in the past were promised. After 30/40 years, workers deserve full pensions.

Pension funds may be restructured for future obligations, based on current workers and their contributions.

However, cheating and mismanagement in some categories should be addressed. Last-day promotions to increase pensions should not be accepted.

Same as above. Pensions derived from collective bargaining agreements should be composed of workers, school, fire, police and laborers and government payments and reflect the amounts deposited. Chicago has to set up a new account, different from the one mandated by the state, to compensate Springfield’s failure to update legislation. Workers and residents should not be victimized in the process.

Again, this is a crisis of priorities, not of money. Instead of tax breaks and misused TIF funds, the City needs to restructure its economy, including pensions. Also, privatizing city services has lead to a decrease in the number of workers contributing to pension funds. There should not be more privatization of City’s services.

Same answer as above.

In general, we should not concentrate on taxing consumers, but producers. We collect taxes on sales but give tax breaks to corporations to produce the goods we all need. At the point of sale, producers charge their taxes to the consumer, so they end up not contributing to the general revenue. The City has to work with the State and County to review the general tax-break system that is subsidizing industries and charging residents as homeowners and consumers.

The City should re-establish the Summer youth programs, as well as several other programs, and de-privatize some of it’s services and hire more workers.

All. I oppose guns. The second amendment of the Constitution is about militias, not individuals. Guns are instruments designed to kill people. I would support, again and again, a total ban on weapons, and a total prohibition to allow the sales of weapons. Increased restrictions do not solve the problem, never have. We are imposing more restrictions on the sales of medical marihuana than we have on guns.

The mere act of electing a School Board does not guarantee more transparency and more efficient education. We need to redesign the whole education system. Our curricula is currently being bought from Texas, and our Local Schools Councils have less power than they had years ago. Education should be put in the hands of the community, with enough decision power to make a difference.

TIFs should be transparent, audited every year and its operations should be made public. Resident of each ward should have decision power over all TIF projects, their management and, is if it is the case, on how to spend the surplus, after money for schools and other public project has been taken from it.

The 25th Ward sees high inequalities. The west loop area within the Ward has high malls and highly developed commercial areas; Chinatown has been given preference by the incumbent alderman, promoting its commercial area and as a tourism destination, while the largest portion of the Ward, Pilsen, has been neglected.

Community resistance to gentrification in Pilsen has ended up in a stalemate. There are no incentives or economic support for family business, and there are no large commercial malls. TIF money has been used to subsidize large corporations in the west loop.

We will work in a long-term employment/economic development plan which includes capital investment and financial support for family-owned small business, including a “condominium-mall” in Pilsen.

Aldermen are supposed to represent residents in their Wards, same as other elected officials. A State Senator represents half a million people, an Alderman 55 thousand. As a Mexican immigrant, I also know that México City, 6 times the size of Chicago, has a City Council with only 66 “asambleístas” or representatives.

But “size does not matter”. What matters is that Aldermen do not truly represent all of their residents, but a handful of rich campaign sponsors. Decisions are made on a personal basis, without taking into consideration how people in the Wards thinks or feel, and according to legislative protocol, rather than importance of the issues. Whether 50 or 20, Alderpersons should be true representatives of their residents.

A gambling operation is not needed to attract more tourism or make more revenue. Chicago has enough museums, theatres and parks to be a first class tourist attraction.

...“properly employed”? Red light and speed cameras, as a way to reduce accidents or traffic incidents, have proven to be completely useless, the same way the police cameras have proven useless even next corner from Rahm Emanuel’s home. The whole system is being dedicated to extract money from drivers, on top of parking fees and other measures.

What are the top three issues in your ward — the ones you talk about most on the campaign trail?

Close to 60 % of the 25th Ward residents are “working poor”, low income workers who can’t make ends meet. Their rights in the workplace are constantly violated and there is little to no enforcement of workers’ rights. Wages are stolen on a daily basis, people earn less than minimum wage, perpetuating a poverty cycle. We insist on a $15 an hour minimum wage now for companies with over $500,000 annual revenue.

Parts of the Ward are “transportation deserts”, places without CTA (and even taxi) services. This has a negative impact on economic development for some areas.

Environment is a big cause of concern. The 25th Ward contains some of the most polluted areas in Cook County, according to the EPA, and new pollutant industries have been already approved to set up shop, including a second metal shredder one block away from the only high school. 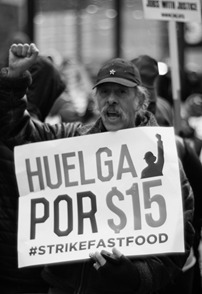