Proco "Joe" Moreno is endorsed by the Sun-Times. Read the  endorsement here.

Yes or No: No to reducing current benefits

Please Explain: The workers did not contribute to our problems. Let us not play into this false choice that there is a “a bad choice and a worse choice”. I support a sales tax on services IF the revenue stream can be dedicated (codified by law) to debt and pension obligation reduction and funding for our schools. Currently, if a working class family of four spends $400 at the grocery store, they pay a sales tax. However, if a single individual spends $400 on a "day at the spa", they pay zero sales tax. As our economy moves further and further to a service economy, we need to recognize that this is a question of "Fairness in Taxation".

A: I can’t see many circumstances if we enact my previous example along with approving a Chicago casino. I know it is “popular” to say we need to cut more, but that is disingenuous as we cannot cut our way out of this problem.

Q: Please explain your views, if you wish, on any of these three revenue-generating measures.

A: I have explained my views besides a tax on electronic financial transactions. A small tax for such transactions would raise millions while not stifling investment. I have researched and found not one study that proves otherwise. Scare tactics are all that are given by those that oppose such a tax. Markets will adapt and Chicago will continue to house a healthy exchange arena.

Please explain: I support overtime to a point. But the bottom line is that police officers are human beings that get tired like the rest of us. We need to invest in more police officers rather than continuing to rely on those that may not be at their best on the 50th or 60th hour of their work week.

A: Mandatory minimums on those that commit crimes with guns.  Serial code registration for all guns sold.

Please explain: I circulated petitions to get enough signatures to get the question "Should the voters of Chicago elect the School Board?". We prevailed and it will be on the ballot in February. I do not believe any other Alderman (or candidate) actually organized their own petition drive to get this important question on the ballot. The main reason I support some form of an Elected School Board is that we need parent (of Public School children) and teacher voices represented on the Board. However, an elected School Board is not a panacea for reform. If we do move in this direction, perhaps a hybrid model (some members elected, some appointed), would be appropriate. I also think candidates for an Elected School Board should have some qualifications before running for this office. A lot of our Local School Councils (LSCs) have vacancies and I would propose that any candidate serve at least one full term on an LSC before running for Board Commissioner.

Q: Tax Increment Financing Districts are the primary economic development tool of the city. In a TIF district, taxes from the growth in property values are set aside for 23 years to be used for public projects and private development. Do you support increasing the annual TIF surplus that the mayor and the City Council have declared in each of the last few years, money that goes to the schools and other city agencies?
Yes or No: Yes

Q: What reforms would you propose for the city's TIF program?
A: Unfortunately, TIF legislation that was intended to help "blighted" parts of our city has been grossly abused. That is one reason I voted, along with 10other Aldermen, to declare a surplus on TIF and put the money back into our schools and other taxing bodies. I believe and support declaring a surplus in all TIF districts that exist in areas that are not considered "blighted". I have two TIF districts that overlap my ward. I have supported TIF funds to be used three times because the dollars went to improving our schools/ education. We used TIF funds to build badly needed playgrounds at two Public Schools. We also used TIF funds to refurbish a portion of Presence Hospital to house a modern, nursing school that was formerly housed in the suburbs. I have seen no evidence that expanding TIFs in my ward to be a net positive benefit for the community. I have repeatedly stated that we need to publicly abolish TIFs, and create no more, in parts of the city that are not considered “blighted”.

A: I believe each Alderman has to not only vote yes or no on plans that come from the Administration, but also and as important, craft their own legislation to deal with our unfunded pension liability and economic development. For almost ten years, the city has struggled to pass a Transit Oriented Development (TOD) Ordinance. Many other cities have this type of progressive development codified in their local laws. I authored and passed the first TOD ordinance of its kind two years ago. It allows for residential density to be built near our hard rail system, in the neighborhoods. My TOD ordinance reflects the needs and will of a growing population of Chicagoans-- those that do not want, have or need a car. The TOD ordinance is bearing fruit as the first TOD building was built two years ago- 99 residential units, 10% truly affordable units, no parking, inside bike parking, on site car sharing. The building is fully occupied and generates approximately $300,000 in tax revenue a year. This $28 million project replaced a one story dilapidated Pizza Hut that had sat vacant for almost 10 years. 150 construction jobs were on site for almost two years, and the retail and office portion of the site employs dozens of Chicagoans. If not for the TOD ordinance, the empty Pizza Hut would likely still be there. The TOD ordinance has legs as we just passed an ordinance (supported by the community) to build a second TOD building on Milwaukee Ave. Currently, three additional TOD proposals are moving through my community review process. Most candidates will talk in platitudes about economic development. I intend to continue to author and sponsor ordinances, like the TOD ordinance, that specifically address economic development.

A: IF it can be proven to me that the city would save money, without having a depletion of city services, I would support the council being cut in half.

Please explain: I only supported one red light camera in my ward where a pedestrian was hit from a motorist who blew a red light. Like all technology, it can be used for the good of the people, and for the bad. Right now, we have to audit the way we are manning our red lights. AND, have Alderman ready to stand up when more red lights are proposed for sections of their ward that the evidence does not support (as I have done on several occasions).s

A: Clean streets, safe streets, good schools. My ward is one of the most economically diverse in the city. These three issues are on the top of mind of all of my constituents- regardless of income. I believe we have met their needs in the last four years and I look forward to exceeding their needs in the next four years. This is based on my track record of providing result -- not platitudes. 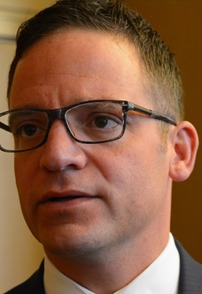