I support putting the burden on the backs of those who the city gave those misappropriated dollars to in the past.  I support an audit, perhaps a forensic audit to investigate who and what benefited from contracts that had enormous cost over runs, corporations that have and are using TIF dollars and have realized profits as a result, and who are currently benefitting from waivers on the backs of the City of Chicago.
As for the retirees of the city, a deal is a deal.  Reducing city that were earned years ago is unfair now that those employees have retired.  The city is responsible for the poor management of the pension funds.  For decades powerful mayors ignored their fiduciary responsibilities.  The employees fulfilled their end of the contract, now its’ the citys’ turn.

A: I will be an alderman that will protect the fixed income of the retired employees of the City of Chicago.  Reduced benefits, property taxes and user fees are already digging deeply into a monthly amount of money that is set.  This lazy administration finds creative ways of spending our money but falls short when it comes to creating new revenue sources.  I not going to say that I would not support a property tax increase but here are the circumstances that must happen before I would consider it.
¥    Reduce City Council committees by 25%.
¥    Require any institution that has money that 100 million dollars in a trust fund pay full water and sewer rates.
¥    Restrict alderman pay raises to be no more than the smallest city worker pay increase.
¥    Restrict aldermanic current and retiree benefits to the level of city employees and retirees.
¥    Reduce current terms the TIFs in the central business district.

A: I question if CPS has acted in any way that their investments are limited.  They are planning a $14 million expansion of Walter Payton H.S. and a brand new high tech high school on the former Cabrini Green location.  I would first propose that they scale those plans back and utilize some of the closed schools in their inventory.  I do support a couple initiatives to increase revenue for all of the above municipal pension funds.
¥    Restricting the use of TIFs in central business districts.
¥    Canceling plans to construct the DePaul arena on city land (DePaul can BUY the land and pay for the total project if they think that it is still a good idea.
¥    Construction of one, maybe two casinos with proceeds from them dedicated to municipal pension relief.

No, however, I would support a deposit on all plastic and glass soft as well as hard drink containers.  This has been very successful in other states at reducing litter.  Uncollected annual deposit revenues can be used to generate income.

* A tax on non-Chicago residents who work in the city
Yes.  We should have done this long ago.

Yes.  A small tax (1/4 cent per $100) would not adversely affect the market nor the rates of exchange.  We supported these institutions who fell apart in 2008 with our tax dollars.  Its their turn to support us now.

Yes.  The city has been very creative in redeploying officers in certain areas of the city but the hiring rate has not kept up with attrition.  We need more police officers walking the streets and riding bikes throughout the neighborhood in order to improve community relations and crime prevention.

A: Require the recorded transfer of every gun in Illinois when there is a new owner.
Require the states attorney to prosecute the last owner of a gun if it is used in a crime.

A: I support reducing the number of years from 23 to 10 years.  I also support restricting the use of TIFs to economically disadvantaged neighborhoods.  Finally, I do support surpluses for schools and city agencies.

A: I would establish a Chamber of Commerce along the 87th street corridor.  It is unfortunate that one of the largest areas of retail business do not have a business organization to advocate for them or that the residents can not refer to.  This will happen when I become alderman.  Secondly, I will utilize TIF money to provide facade upgrade opportunities to small business strips in the ward.  Creating curb appeal to area businesses is the first steps to encourage shoppers to support stores in their neighborhood.    Additionally, I will insist that developers and architects bring with them the contractors that intend on bidding on their projects before they are approved by the community.  Contractors will be responsible to insure employment opportunities for skilled workers that represent the ethnic community.  Finally, I will establish collaborations with community non profit organizations for job training programs for the chronically unemployed.

A: 25.  I believe that the city council can easily function being reduced by half.  This reduction should accompany a term limit for the mayor’s office of 8 years.

I support a casino(s) with all revenues being dedicated to shoring up municipal pensions.  The residents could support this as well given the choice between this or a property tax increase.

A:  No.  There are too many deployed in areas that do not make driving safer.  Speed cameras are worse.  Areas where speed cameras accompany large signage indicating required speed, digital signs signifying your current speed before the speed camera sees safer driving and fewer tickets than speed cameras that are camouflaged into the landscape.

A: 1.    Reliable city services.  Sidewalk and streets scheduled to be repaired are placed on the ward’s menu only to be removed.  I have pledged to create a system in which repairs are catalogued on a worst first basis.  After that residents will be able to track their blocks and know what streets are being repaired, where they are being repaired and when theirs is scheduled to be repaired.
2.    Enhanced community policing.  The residents wants a closer relationship with the police officers on their beat.  I contend that there is not a code of silence but a code of trust.  When officers know personally the residents of the ward and vice versa you will see a dramatic solving and prevention of crimes within the community.
3.    Employment.  I will advocate for ethnically based employment.  Instead of trying to create new jobs I want to fight for the jobs that are already in my ward which are currently going to people that for the most part do not relate to or live near my community.  Many contracts are bided on years in advance.  I want to hold contractors accountable way before it is time to break ground on projects.  This gives contractors ample time to work with the unions to insure this goal is met. 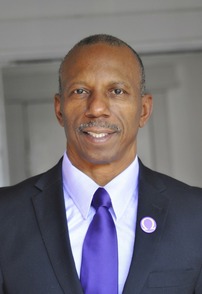 Marvin McNeil is endorsed by the Sun-Times Editorial Board. Read the endorsement here.