Please explain:
We have to be honest about the situation we are in with liabilities owed to workers.  I will support a comprehensive solution that fixes the problem and shares sacrifices evenly. A model, that has won labor support, exists and I will strongly encourage everyone to adopt that model.
Q: Chicago's pension systems for municipal workers and laborers already have been restructured, reducing benefits, but the city has yet to identify where it will find the revenue to sufficiently fund those systems. Under what circumstances would you support a property tax increase to raise the needed revenue for the fire and police pensions and/or the municipal workers and laborers pensions?
I look forward to the Illinois Supreme Court shedding light on what we can and cannot do with pension reform. I believe their decision will provide a framework for continuing the discussion on pension reform.

A: I look forward to the Illinois Supreme Court shedding light on what we can and cannot do with pension reform. I believe their decision will provide a framework for continuing the discussion on pension reform.

* A tax on non-Chicago residents who work in the city
Yes or No:No

Please explain:
We need to acknowledge there aren’t enough resources allocated to promoting public safety and hire more police. I also support Chicago’s community policing model and urge neighborhood residents to be active in maintaining safety in their areas, by starting neighborhood watch groups, such as Scottsdale, Ashburn and Wrightwood Rangers in the 18th Ward. Police cannot do all the work and neither can residents. I believe beat cops should be developing substantive and productive relationships daily with neighborhood residents.

A: Any common sense gun legislation that more seriously punishes gun possession violations. Though, I do think the best way to decease the flow of guns into Chicago and ultimately decrease crime is to find more ways to employ our constituents. If we decrease the unemployment rate, and give folks living wages, I think Chicago will see less guns and even less crime.

Please explain:
The public should elect school board members. We need better schools to uplift our community, and our residents should have a voice in that process.

Q: TIFs are the primary economic development tool of the city. In a TIF district, taxes from the growth in property values are set aside for 23 years to be used for public projects and private development. Do you support increasing the annual TIF surplus that the mayor and the City Council have declared in each of the last few years, money that goes to the schools and other city agencies?
Yes or No:
I do not think the use of TIF funds can be discussed in general terms. However, I do think TIF funds should be used to revitalize blighted areas and help create new local jobs.

A: I support a more open and transparent process for the use of TIF funding.

A: I would focus on responsible and well-planned TIF and 6B incentives to attract businesses that bring family sustaining jobs to the ward.

I want to make it easier for businesses to locate in my ward. Potential developers and business owners should have a clear picture of the expectations of the community and local elected officials. Once they commit to our neighborhood I want all interested parties to work together and bring development to the community that benefits everyone.

To promote new development, I hand out information about 18th Ward boundaries, demographics, schools, and churches to prospective businesses and developers.

Q: The City Council has 50 members, but civic groups and other regularly argue for reducing the size of the Council. What should the size of the Council be? Please provide a specific number. And why?
A: Although I am interested in consolidating resources and saving as much money as possible, my community needs effective representation that only comes from smaller wards.

Yes. As long as it is located in a community that agrees with the location and revenues are used to increase funding for schools and public safety. I believe a casino, if properly planned and sited, could bring new visitors, jobs, and revenues to our city.

Yes or No: It depends.

Please explain: I support cameras at dangerous intersections where statistics show a high number of red light violations. These cameras should only be used to improve public safety and should not be relied on as a substantial source of revenue.

Q:What are the top three issues in your ward — the ones you talk about most on the campaign trail?
A: As alderman, I focus on education, public safety, economic development, jobs, infrastructure, and veteran housing. 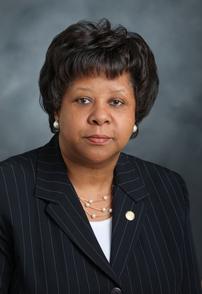