Please Explain:    Workers poured their lives into their work, and deserve a decent retirement from the city.  The City played with the money, not sufficiently funding the pension systems while the market was up.  Working people should not pay for the problems caused by the bankers financial crisis and the machinations of our politicians.

A: Under no circumstances.  Again working people did not cause the crisis in underfunding, and they should not be made to pay for that crisis.  The banks and the hedge funds are responsible for the crisis.  Moreover, those entities received gigantic taxpayer bailouts in order to stay solvent, and have reaped massive profits in the years since.  Money needs to be raised to support the pension systems – that money must come from those that have it, those responsible for the crisis:  the wealthy, the big corporations, the banks and the trading firms.

A: End the TIF program and return all TIF surplus funds to the schools and other city services.  Establish a tax on financial transfers, so the LaSalle trading firms have to support the life of the city that they profit from so handsomely.  Make the banks return all interest paid by the school district on the so-called “Toxic Swap” agreements – where the banks bamboozled the school district out of more than $100 million dollars in what were fraudulent agreements.  Establish an income tax on wealthy residents of Illinois.

* A statewide expansion of the sales tax base to include more consumer services   Yes or No:  NO

Please explain your views, if you wish, on any of these three revenue-generating measures.   See above regarding the “LaSalle Street Tax.”  The other taxes are on working people.  Working people should not pay additional taxes – they are taxed too heavily already.

Please explain:   A: The question is posed as if the problem of crime and violence is just about policing. This society has dealt with the problem by sending people to prison – the biggest proportion of its population of any in the world.  And that has not even solved the problem.    The problem of crime is a problem of entrenched poverty – which has led to a further problem of entrenched gangs.  The solution is not more police.  The solution is jobs for people, the solution is a good education for the entire working class, the solution is to offer a good life and a future to our youth.    A student of mine organized a protest on the South Side in the wake of Hadiya Pendleton’s murder.  Rahm’s response was to establish a very small summer jobs program.  A study of that program found that youth who took those jobs were 40% less likely to be involved in violent crime.  To really address violence, we ought to massively expand programs like this one.

A: Guns are not the problem of violence in Chicago.  The problems have much deeper roots – poverty and entrenched gang structures.

A: The school board ought to be elected, that would provide a measure of democratic accountability in a school district that is currently ruled as a dictatorship by the mayor.  However, we should not be under the illusion that an elected school board would solve our problems – our schools need money, and electing board members would not automatically generate additional money.

A: The TIF program diverts public money to private interests.  It takes money away from schools, parks and other services, so that politicians can make gifts to companies, like Target, Dominicks, and Marriott.  When TIF funds have been used for public services like schools, that money has gone disproportionately to schools service the middle and upper classes.  The program serves to divert funds from neighborhood schools that serve the working class, to hand it to schools that serve the privileged.

Q:  What would you do as alderman to boost economic development in your ward, and bring jobs to your community?

A: Working people need to fight – they need to fight for higher wages, more jobs, and better public services.  Higher wages will not be given by the Democrats – workers will need to fight for them.  Better schools, more programs at the parks, longer hours at the libraries would mean more jobs in the community, and more people with money to spend.  That would result in more spending at neighborhood businesses, which would in turn mean more jobs.

A: The City Council should not be reduced.  The current system means that residents can potentially have relatively easy in-person access to their representative on City Council.

Please explain:  NO. A casino is basically a tax on working people.  It would be a drain on resources in our community, and would come with heavy costs – increases in gambling addiction, bankruptcies, etc.

Please explain: My feeling is that the number of cameras is probably sufficient for any purposes of public safety.  But it is clear that the City has not had public safety in mind with this program.  They have used it to hand out a big contract to RedFlex, a contractor with close ties to certain politicians.  And they have used it to raise money – effectively as another tax on working people in the city, who are already overburdened with taxes, fees and fines of all colors and stripes.  The Tribune report showed clearly that the timing on the cameras was tampered with in order to raise more money.

A: Wages, jobs, schools and other public services.  The working class needs higher wages and more jobs.  Working people need a good education – just like Rahm Emanuel received at New Trier, or that his kids receive at the Lab School.  And the infrastructure in working class communities like the 25th ward need to be maintained.

Political/civic background:  Union Delegate at Lindblom Math and Science Academy; active at school union.  Active around education issues in Chicago, as well as neighborhood environmental issues, labor issues and against all wars. 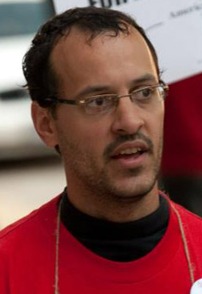