Please Explain:
Absolutely not. Do not support any solution that requires reducing benefits to current or retired employees. Promise made should be promises kept. Also, we have to change the nomenclature that we use to talk about this issue. These are not pensions in the sense that the average person on the street understands. This is their “social security” type retirement funds we’re talking about. Framed in that context, this discussion takes on a whole different perspective. Add to that discussion the fact that over 50 years ago (1951) Congress added Section 218 to the Social Security Act. This mandated that all states be required to offer public employees the option to contribute to Social Security. Since Chicago’s “pension” system (teacher’s included) far preceded Social Security, public employees stayed with the Chicago system because it was a better deal. I believe this needs to be revisited for future public employees. To me it seems ludicrous that we continue to support a retirement system when the federal government offers an alternative and one that cannot be manipulated by employers (read: politicians). If this transition were to occur then both the city as well as the state would have to contribute in the same way that any employer contributes and in a timely manner. Long-term I believe that this is the solution.

A: Under no conditions would I support a property tax increase, when we have so many alternatives available to raise revenue. First and foremost we need to shut down the Tax Increment Financing program and return over $700 million in uncommitted surplus to the taxing bodies from which these funds were taken. It is absurd that we prioritize city funds for neighborhood development when we can’t even keep our schools open. We’re “painting the house as the roof is caving in”. Then we need to look at a LaSalle Street transaction tax that by some estimates could add $1 billion to our tax base. We also need to pressure our state representatives to pass the graduated state income tax and to explore various options for a public bank, both city and state.

3) Revenue Q: In light of the financial issues discussed above, do you support any or all of the following measures, each of which would require, at a minimum, approval by the Illinois Legislature?

Yes or No:
* A tax on non-Chicago residents who work in the city
Yes or No: Not until all the other options I mentioned in #1 are implemented.

Please explain: This is only an immediate, temporary solution and it must include putting more of these officers on foot as beat patrols. The long term solution, however, is providing well-paying jobs to adults and our youth and to provide more funding in our schools for wrap around services that give our children viable alternatives to the gangs. Unless we do that, all the officers in the world won’t solve our crime problem.

A: I think further legislation without reasonable enforcement is a waste of time. In addition, we have to look at what is driving the flow of illegal guns – the drug trade. I believe we need to end the war on drugs and begin to examine the alternatives of legalizing drugs to dry up the business of the gangs.

Please explain: The citizens of this city need to have a voice in who sits on the school board, however the devil is in the details. How we implement this solution is key so that we don’t end up politicizing the Board such that we’re no better off than with an appointed Board.

Yes or No: But more importantly I favor shutting down the TIF program entirely.

Beginning early in Mayor Richard M. Daley’s administration the tax increment financing program was launched and became a huge boondoggle for political favors and pinstripe patronage. It was off the books of the city budget and therefore subject to little scrutiny. Yet for years it drained tax revenue from the agencies which depended on it – most importantly our schools, but also the city itself. Today over 30% of the city’s land is under a TIF, skimming off hundreds of millions of dollars from the taxing bodies that depend on the funds and redirecting the revenue to corporations and individuals under the guise of neighborhood development. I’ve come to call Chicago’s implementation of TIF the “Bucks for Billionaires” program and it has had dire consequences and major negative impacts upon the city’s budget as with the other taxing bodies.

Therefore, the first step in solving our financial crisis is to enact a moratorium on any future TIF’s and most importantly shut down those TIF’s that are the largest drain on our tax base and those that are not by any stretch of the imagination in blighted areas and therefore do not meet the “but for” criteria set forth in state legislation. A research study that I had my students at Northwestern undertake showed that over $700 million of TIF funds is currently sitting unallocated and uncommitted. Extensive research done by Tom Tresser and the Civic Labs show similar results. Until this issue is addressed and resolved there is absolutely no justification in raising property taxes or cutting city services. I believe that the tax increment financing program has been and continues to be the crux of our city’s financial woes.

We need to look at other alternatives for encouraging business development and those solutions need to include the establishment of a public bank in Chicago. Providing tax incentives with very stringent job creation and property value increases needs to be explored. In addition, we need to consider directing a portion of the LaSalle Street tax toward business development, once we have our fiscal house in order. Finally, we have to consider that Chicago is a world class city, with world class educational institutions and a vibrant central business district as well as neighborhood districts. We need to put much more emphasis on how we “sell” the city in a way that requires no financial incentives at all to lure new businesses and development.

I have said numerous times that what our ward needs is a “Beat Alderman” – someone who is on the ground and in the neighborhoods, rather than holed up in the ward office or downtown. I have advocated for support of our nascent Chamber of Commerce to work in concert with our Development Corporation (Rogers Park Business Alliance) to bring new businesses (read: jobs) into our community to fill all of our empty storefronts. This requires a beat alderman who will be a hands on champion for this development and be a key resource for both organizations to be available to meet with new business owners and encourage entrepreneurial enterprises for residents of the ward.

Leave it as is at 50. The cost savings would be trivial in a $9 billion dollar budget. However, of even more concern is that reducing the number of aldermen would reduce responsiveness from the ward office. In addition, I believe that we actually need to increase staff in ward offices in order to drive civic engagement in our neighborhoods, which I see as one of the key responsibilities of an alderman.

We have plenty of other revenue alternatives, as I mentioned above, and there are far too many negative repercussions in having a casino in Chicago beginning with the fall-out from the addiction of gambling and its social consequences.

Please explain: Unless we can establish without a doubt that a camera actually reduces “net” accidents – in other words doesn’t eliminate one type of accident while increasing others – then I believe we need to shut the entire program down. Otherwise all we’re looking at here is a revenue generator put on the backs of those who, for the most part, can little afford it.

A: The wide-spread increase of crime (particularly murders and shootings) throughout the ward.

Occupation: Adjunct Lecturer, Political Science, Northwestern University; Author: “Piss ‘em  All Off: and other practices of the effective citizen”  and most recently “Transparent Government: What it is and how you can make it happen” 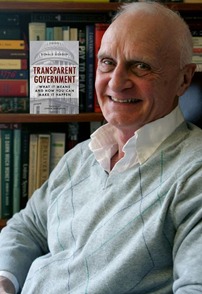