A: The fact that the city did not do its part in paying into the pension, which has caused the pension crisis.    Chicago's pension systems for municipal workers and laborers already have been restructured, reducing benefits, but the city has yet to identify where it will find the revenue to sufficiently fund those systems. Under what circumstances would you support a property tax increase to raise the needed revenue for the fire and police pensions and/or the municipal workers and laborers pensions?

Forensic audit of city finances to identify areas of waste in all departments that will save money.  Increased transparency to identify how existing dollars are spent.  Identify different sources of revenue that are not Fines and Fees.  The inevitability of an increase in property tax to ensure that we can address our debt obligation and pension obligation.  Everyone has to be willing to share in the pain of addressing the pension problem.  It’s in our collective interest.  I would propose and increase in the service tax and commuter tax.

A: We have to be fair; we must honor our pensions to the people that went to work every day to serve our city.  The Illinois Constitution has specific language that protects pensions.  You (the state) cannot renege now on a promise you made in 1992.  The states’ budget problems cannot be solved by cutting pensions.  The states constitution did not say a portion of your entitled pension will be paid out or that the state legislatures can just restructure pension payments under the disguise of using the term “REFORM”.

First, funding for schools would not be based on the zip code or for those in communities that have the highest income per capita.  Every Chicago Public School in every section of the city or the county should be given what each school needs to meet the expected achievement goals for all students by providing the resources needed to give an equitable education.  In addition, politicians should listen more to those who are doing the work in the trenches, the actual work.  The key to improving public education in Chicago is to implement sound education policy and practice- not just doing what is politically expedient.  We must put our education system back in the hands of educational professionals, not corporate managers or those who have no sense of what good education policy and practice looks like.

A: We have been taxed, taxed and taxed again, it is time for corporations, LaSalle Street Tax (Chicago’s Wall St.) and commuters pay the millions of dollars that they make off everyday Chicago families.  We need alternative resources of revenue for the city.  We cannot keep plugging our budget shortfalls with tickets, fines, and fees.   That is one reason why I am for a commuter tax.  People come into Chicago from the suburbs or even the neighboring states, collect their paycheck, take it home with them, and then spend their money in their own municipalities.  While we the hard working people of Chicago keep getting beat down with  city stickers, red light and speed cameras, residential permit parking stickers and guest passes.  We the people of Chicago have nothing left to give.  We have to eat too.

Please explain:   Number one the Chicago Police Department works entirely too much overtime, which causes lack of rest and lack in judgment.  This would avoid volatile situations and elevate millions of dollars paid out to victims families for inappropriate police behavior.  We cannot tell individual wards that we need to reallocate police services to high crime areas.    Additionally this would create a restored justice practice to build relationships in the community this will rebuild trust.

A: The stop the illegal firearms act of 2013 and Chicago Crime Intelligence Center with ATF

Please explain:   I am fully in support and circulated petitions in the 46th ward for an elected school board.     With an appointed school board and CEO, you are beholding to the administration and or the bodies of people that appointed you.  You have no say so about any issue; you are not independent in your actions or your thinking.    You must move lock step with whatever is asked of you.   It doesn’t take rocket science to know that an elected school board will absolutely support the Teachers, parents, and most importantly the children.   I think the question is why doesn’t Chicago, the only city in Illinois don’t have an elected school board.

A:   There needs to be increased transparency, a clear accounting of how T.I.F. dollars are used, increased accountability and more community driven input on how T.I.F. dollars should be used in each individual community.   T.I.F funds should be used solely for the intent and purposes for which they were created, Chicago Public Schools, Chicago Park District and blighted areas.

A: Launch and implement workforce development programs so that you have a high quality labor force in the ward.  Developing comprehensive economic development plan for the ward helps create cohesive development.  The plan must be developed with community input at the forefront.

A: I think the wards should remain the same unless you are going to increase the budget and the size of the aldermanic staff.  You are initially giving less alderman much larger wards and currently unless, you are the head of a large committee, you only get 4 full time staff and maybe out of you contractual money you can hire 2 full time employees for $15. to $18. an hour without benefits. (Obama Care)  Additionally if you run a full service ward, office this will be a very difficult task.  Eventually some part of your ward will go lacking.

Yes or No:Yes and No

A: There are pros and cons to supporting casino gambling in the City of Chicago, I believe it would bring a tremendous amount of jobs and revenue however; unfortunately, it could cause a lot of people gamble away their only source of revenue in hopes of getting rich quick.

Yes or No:Yes to the first question. No to the second half of the question.

A: I will support the red light camera program when it is implemented fairly and is not used primarily as a revenue-generated scheme.

A: Transparency, more community input in the decision making process of what happens in the ward. Affordable housing development without displacement Crime fighting for choices and resources for our young people.

Occupation:  Service Coordinator for adults that are mentally challenged 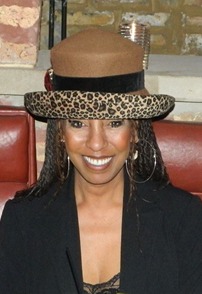