Q: Chicago's ﬁre and police pensions are greatly underfunded, and the city is required by the state to make a $550 million payment into the pension funds by the end of 2015. Do you support restructuring the pension systems, inevitably reducing beneﬁts, to put the ﬁmds on soundﬁnancial footing?

No: Please Explain: Any new or added revenue should be directed to the pension fund.Example: Red light tickets, speeding cameras, and increased revenue from city sales tax and real estate transfer tax.

Q: Chicago's pension systems for municipal workers and laborers already have been restructured,reducing beneﬁts, but the city has yet to identify where it will ﬁnd the revenue to sufﬁciently fund those systems. Under what circumstances would you support a property tax increase to raise the needed revenue for the ﬁre and police pensions and/or the municipal workers and laborers pensions?

A: Along with reduced expenditures for non-essential services, I would consider supporting a property tax increase to balance the city budget and pay down our debts including pensions.

Q: Large and growing payments required to keep the Chicago Teachers’ Pension Fund solvent are squeezing CPS‘ budget, forcing cuts elsewhere and limiting investment. The Chicago Board of Education has increased property taxes, but it is not enough to keep up with the high annual costs. What measures do you support to ensure a solvent retirement system and to improve the district's ﬁnances?

A: The city council does not run the public school system. I would support an elected school board to make sound decisions.

Q: In light of the ﬁnancial issues discussed above, do you support any or all of the following measures, each of which would require, at a minimum, approval by the Illinois Legislature?

Please explain your views, if you wish, on any of these three revenue- generating measures.

I would support an expansion of the sales tax base statewide. Electronic ﬁnancial  transactions can be done anywhere, they’re here now paying taxes in Chicago. If taxed, businesses in the City of Chicago would leave, move outside city.

Q: Do you support hiring more police oﬁicers to combat crime and gun violence in Chicago?

Q: What legislation in Springﬁeld would you support to try to stem the ﬂow of illegal guns into Chicago?

A: I would support and work with resolution task forces to balance the concerns of the community, while still protecting the citizens right of the 2nd Amendment of the constitution. I would support legislation that ﬁghts; straw purchasing, unlicensed dealer penalties,and the examination of current gun running.

Yes:Please explain: I feel that with an elected school board, the board has an obligation of operating in the best interest of the voting body than that of the person that appointed them.

Q: TIFs are the primary economic development tool of the city. In a TIF district, taxes from thegrowth in property values are set aside for 23 years to be used for public projects and private development. Do you support increasing the annual TIF surplus that the mayor and the City Council have declared in each of the last few years, money that goes to the schools and other city agencies?

A: Once the TIF area has been developed and the payback of bonds has been satisﬁed, excess funds should be returned to the taxing bodies.

A: I would use TIF funds to restructure and revitalize my business trips. The priority should be for projects that create permanent jobs after projects are built, not just in development.

A: 50, as it is. I feel that taxpayers should have a strong accessibility to the person that represent them. Each ward has approximately 50-60,000 residents, an increase in that number may hinder representation.

Yes:Please explain: As long as about 85% of the jobs created are city residents. The tax base that it incurs, should be earmarked to city pension funds and public schools.

Please explain: Not only are they are not equally deployed throughout the city. they are in locations that don’t make sense.

Example: 79th and Pulaski - why would camera be posted after you pass school instead of in the block before school to slow traffic down for safety?

79th and Talman - no entrance or exit at location for school. Kids enter and exit school over two block and around the corner away.

67th-71st and Kedzie - No pedestrian crossing in the center of this stretch. Fenced golf course one side of street. This gives the perception of revenue based only.

A: 1. The decline of city services/ public safety 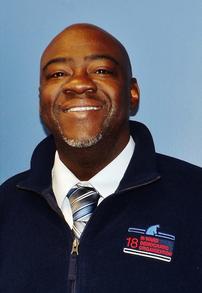 Derrick G. Curtis is endorsed by the Sun-Times Editorial Board. Read the endorsement here.