Carrie M. Austin is endorsed by the Sun-Times Editorial Board. Read the endorsement here.

Please Explain: As you note, the state determines the structure of the City’s pensions, including police and fire. It is up to the City Council to identify ways to pay for it.  I believe it is important for the City to meet its pension obligations and continue to provide vital services to residents.  The City worked with the Municipal and Laborers pension funds to develop a plan, which will provide for guaranteed payments by the City.  This negotiation required all parties, the City, the unions and taxpayers to incur added costs and/or reduced benefits.  But it provided a path to pension solvency that City employees and retirees need.  I believe that resolution of other unions, such as police and fire should follow this same negotiation process to ensure that all City employees and retirees can realize the same pension solvency.

A: As Chairman of the Budget Committee, I beg to differ.  In its 2015 budget, the City did identify a revenue source to fund its $50 M obligation by raising the telecommunications tax.  Budgets are living documents and are amended throughout the year based on projected revenues and expenses generated, which are affected by many moving parts.  The City’s ability to raise the telecommunications tax was authorized by a bill approved by the Illinois General Assembly.  The City must wait to see if the Illinois General Assembly authorizes it for another year before we can finalize our 2016 budget, which will include our $50 M obligation for the Municipal and Laborers’ Pension Funds.  As our obligations stand, the 2016 budget will be the most difficult I have had to deliver yet.  I recognize that additional revenues will be necessary and will strive to find revenue sources that do not impose an additional financial burden on our residents through a congestion tax and a tax on billboards.  I also believe enhanced enforcement of existing laws regarding billboards will generate significant new revenue.  I supported increasing fines for billboard violations to $10,000 per day and enhanced enforcement can help provide some of this new revenue.  I will consider other revenue ideas that help the City meet its obligations without unduly burdening our residents.

A: As an Alderman, I do not have a vote on any resolution of the Chicago Teachers’ Pension Fund.  Clearly this is an issue the CPS Board must address and as Chicago did with two of its pension funds, a resolution should be worked out with the Chicago Teacher’s Union.  Any such resolution must provide the necessary funds to meet the commitment of CPS and should include changes at the state level on how we fund education in Chicago and across the state.

Yes or No: Not preferred but I would consider it along with other revenue options.

* A tax on non-Chicago residents who work in the city
Yes or No: Yes

With regard to a tax on electronic financial transactions on Chicago’s trading exchanges, I believe, in the end, such a tax will hurt the City financially.  The loss of these jobs, which are a vital part of Chicago’s economy, would cost the City in income and sales tax revenue.

Please explain:  Crime in my community is the number one concern of most of my residents.  The City has done a lot to place more officers on the street without hiring more officers, which has helped.  Restoring the strike forces that worked in high crime neighborhoods would help alleviate crime in these areas.

I support a ban on hand guns and believe the issue must be addressed through a constitutional amendment and not in Springfield.

Please explain: Several sister agencies have boars appointed by the Mayor with confirmation by the City Council.  These agencies have been subject to electoral influence by the mere fact that each Alderman is elected by the people.  I believe the Illinois General Assembly should amend the law to require CPS Board members and the CEO of CPS to be confirmed by the City Council.  This way voters will have a say in CPS.

Q: TIFs are the primary economic development tool of the city. In a TIF district, taxes from the growth in property values are set aside for 23 years to be used for public projects and private development. Do you support increasing the annual TIF surplus that the mayor and the City Council have declared in each of the last few years, money that goes to the schools and other city agencies?
Yes or No: Yes, provided the recommended surplus level is determined by a comprehensive analysis of TIF districts and is balanced with fulfilling the statutory purpose of TIF’s to promote development that would not otherwise happen.

A: To start, as a member of the TIF Reform Task Force, there were several recommendations that we made and many have been implemented.

While there is a lot of information online regarding TIF districts, more information should be made available, including M/WBE and city residency compliance.  This will allow the public to see who is meeting, exceeding or failing to meet these goals.

A: As Alderman of the 34th Ward, I am always looking for new economic development opportunities for my community.  I am proud of the economic development that has happened in the 34th Ward, but know there is more to do.  The development of the largest urban solar facility in the world provided significant construction work for residents and continues to provide work through maintenance of the facility.  Development of the 119th & Marshfield shopping center anchored by Target, Inc. has brought retail opportunities and jobs for our residents.  To date, my proudest accomplishment is The Ray and Joan Kroc Corps Community Center.  This facility represents the largest single investment ever made by a social service organization in Chicago.  It has garnered the sponsorship of the Chicago Bulls, Chicago White Sox, Kids Golf Foundation and Trevian Soccer Club giving our children a strong foundation in teamwork.  The project itself created more than 200 construction jobs, including jobs for local neighborhood residents.  If you have not seen this facility, I urge you to come down and check it out.  It is making a difference in the lives of 34th Ward residents every day.

Going forward, as I do every day, I will continue to advocate the 34th Ward as a place to do business and encourage businesses to bring jobs to our community.

The City Council has 50 members, but civic groups and other regularly argue for reducing the size of the Council. What should the size of the Council be? Please provide a specific number. And why?
I believe that the number of Aldermen making up the City Council should remain at 50.  I’ve often heard people say the number of Aldermen should be reduced, but rarely do I hear a rational.  If the rational is to save money, it might be of interest to note that the cost of current 50-member City Council and its staff is 0.03% of the City budget.  This cost seems reasonable when you consider that roughly 55,000 people have direct access to me as their Alderman.  Having smaller wards allows residents to know their Alderman, communicate with them and see the outcome of any action they take.  How many Chicagoans can name their Congressman, State Senator or State Representative?  How many Chicagoans can meet with any of these elected officials on a weekly basis like they can in the 34th Ward?  In my ward I service 11,000 streets and 600 alleys today.  Reducing the number of Aldermen in the City Council would increase that number significantly and reduce service to the residents.  Reducing the number of Aldermen in the City Council will put constituents further away from their Alderman in less accountability, not more.

Please explain:  A casino in Chicago that is targeted to our very large tourist population would bring much needed revenue to the City.  This revenue could be dedicated to the many challenges Chicago faces, including funding infrastructure improvements and pensions.  I also support video gaming with the money be used for these purposes as well.

Please explain:  I have long believed that red light and speed cameras are not properly deployed.  The number of cameras in my community far outnumber the cameras in other wards and I have not received sufficient explanation on why this is the case.  I believe that the City should undertake a detailed review of the number of cameras as well as the deployment of these cameras throughout the City.  Such a review cannot come soon enough for me.

Political/civic background: I have been a member of the 34th Ward Democratic Organization since 1972.  I was elected 34th Ward Committeeman in 1996 and as State Central Committeewoman (2nd District) in 2002 and hold both positions today. I serve as City Vice Chair of the Cook County Democratic Party.  I served as a delegate for President Barack Obama in 2008 and 2012.  I have served as Chair of the Chicago Football Classic since 2007.  I am an Eastern Star in the Masonic Brotherhood.  I also belong to Logos Baptist Assembly. 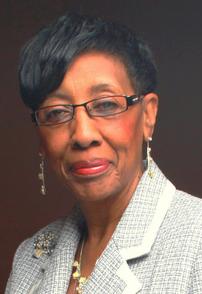