Please Explain: Chicago’s pension system has already been restructured once, as a recent retiree this strikes at the core of fair play. I ( and everyone I know of) have paid their “fair share” while the city failed to equitably fund its side of the bill. The funds can be put on sound footing but not to detriment of one or two groups that have done what they’re supposed to do, pay their bills on time

Q. Chicago's pension systems for municipal workers and laborers already have been restructured, reducing benefits, but the city has yet to identify where it will find the revenue to sufficiently fund those systems. Under what circumstances would you support a property tax increase to raise the needed revenue for the fire and police pensions and/or the municipal workers and laborers pensions?

A: I would support a tax increase only when the city has place a moratorium on any and all non essential spending, stop new purchases for at least six months, and only when we exhausted all other potential revenue streams

A: I would stop any new expenditures and look at the existing revenue streams. I would favor a forensic audit of the Chicago Board of Education’s monetary income and output

* A tax on non-Chicago residents who work in the city
Yes or No:Yes

A: Everyone has a part in the repairing of the financial mess occurring currently in the State of Illinois. The issue is that not everyone who has benefitted from the largess of this crisis is willing to replace what he or she took out. Everyone has to share the burden not just a few.

Q; Do you support hiring more police officers to combat crime and gun violence in Chicago?

Please explain: As a former officer I’ve observed the current administrations position of doing more with less. While this might work in certain situations it will not work, and has not worked in regards to the delivery of police services. I’ve seen the higher than normal rate of “burnout” and the attitude of “doing only what’s required” become the accepted norm

A: I don’t believe we can legislate ourselves out of this problem. The problem lies in the enforcement of the numerous laws already in place. For instance we observed within the last few weeks persons who had been arrested for gun charges released and on bonds commit other crimes (Bailey- Chicago Sun-Times 15 Dec 14). While law enforcement can do its job the other branches of government (i.e. prosecutor, court, judges) should be held accountable for their actions (or lack of) as well

Please explain: My belief is that if the school board is elected by the people they will be accountable to the people

Q:What reforms would you propose for the city's TIF program?

A: There are presently 165 TIFs within the city of Chicago operating as of this writing. The most recent research available ( DC think tank says Chicago pension crisis fueled by TIFs,October 3, 2014, By Miriam Y. Cintrón, GAZETTE NEWS) states that the TIFS are draining resources from the general revenue fund that directly impact the issues of pension viability

A: I would encourage businesses to come to our ward by showing them a ward that encourages and supports business. I would also encourage them by showing the business owner the amount of skilled workers available for work within our ward

A: We should mandate the elimination the practice of gerrymandering, look at the current configuration of the 2nd ward for example. We know that every ten years the legislature redistricts the wards and reconfigures the ward maps based on population shifts. Based on these two issues we could reduce the city council by the same number.

Please explain: As a concept a gambling casino could serve some purposes as long as those purposes for which it being built are strictly adhered to. I also favor a Chicago Lottery with the funds going directly to help ease the pension crisis

Please explain: The city has too many red light cameras in my opinion. They are not employed or deployed correctly, it seems that they are deployed far to heavily south and west sides of the city.

Q:What are the top three issues in your ward — the ones you talk about most on the campaign trail?

1) Crime and Safety, 2) Education and Training, and 3) Housing

Crime and Safety-We have to reign in the violence and crime in the ward. Our seniors and the community have earned the right not to be afraid to go out of their house or go to the neighborhood store without fear of attack.

Education & Training-Ensure that our ward receives it’s fair share of educational funding both on the state and federal levels. Bring back vocational training, and real job placement.

Housing-Stop the blight of foreclosures in the ward by identifying additional revenue sources that will allow homeowners to keep and maintain their homes. 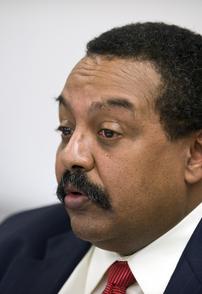